The Chrysalis Lab is the Butterfly Lab’s grant program, which supports four innovative, scalable, and visionary narrative and cultural projects. Each of the grantees receives extensive additional support from the Butterfly Lab staff in the form of narrative training, coaching, expert consultation, technical assistance, and research. They will also participate in broader discussions about long-term narrative strategy within and outside of Butterfly Lab programming.

“The Chrysalis Lab grantees’ projects are creative, innovative, and strategic. We are excited to see these projects unfold, and to share their learnings with the broader immigrant justice movement and all movements working for an inclusive, multi-racial democracy. With nearly 100 applications for these four grant awards, we see great interest and an urgent opportunity for more support for narrative strategy and innovation,” said Taryn Higashi, Executive Director of Unbound Philanthropy. 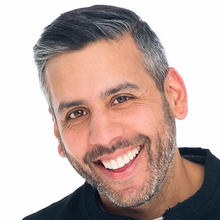 About the Project
The Muslim Protopia Project brings together an array of Muslim artists and organizers for a collaborative worldbuilding experience to transform the monolithic perceptions of Muslim immigrants and their descendants. Participating artists will co-create a multiverse of stories set in aspirational futures that will manifest as fiction, graphic novels, short or feature films.

About Karim Ahmad
Karim Ahmad is a writer, culture strategist, organizer, member of the Guild of Future Architects, and the founder of Restoring the Future, a network of community partners using worldbuilding and industry organizing to build a more just and beautiful media arts system. He was the Creator and Showrunner of the groundbreaking science fiction series, FUTURESTATES, and the writer of the upcoming speculative fiction comic book, DIVIDE. About the Project
The project consists of a Black Migrant Futures Design Lab that will imagine a world premised on values of interdependence, belonging, abundance and dignity of all Black people, inclusive of Black migrants. From there, we will co- create an immersive festival-meets-art installation and a series of immersive web experiences that will invite Black people to explore a beautiful future, inclusive of migrants, in which we are thriving, joyful, sovereign and free.

About the Team
Terry Marshall is an artist, strategist and cultural studies scholar living in Brooklyn by way of Barbados and Boston. He has 20-plus years of experience as a labor and cultural organizer and previously founded the Hip Hop Media Lab and Streets is Watching. He is currently a Senior Fellow at the USC Annenberg Innovation Lab Civic Media Fellowship.

Aisha Shillingford is a multi-disciplinary artist, world builder, designer and cultural strategist originally from Trinidad & Tobago. She is an alumna of Laundromat Project's Creative Change Fellowship, a member of the New Museum Incubator, and an inaugural Fellow at the Race Forward Butterfly Lab for Immigrant Narrative Strategy. Her work has been commissioned by the Movement for Black Lives, Root Rise Pollinate and Creative Wild Fire.

Hawah Hankins is a daydreamer, learner and life path explorer from New Orleans. She has taught ESL in South Korea, interned at Peace Corps in Washington D.C and worked as a librarian at Texas A&M University. She has a BA in Communication/Public Relations and a MS in Human Resource Development. She enjoys helping creative minds cultivate imaginative ideas by interweaving organizational strategy with artistic expression. About the Project
The Tennessee Immigrant & Refugee Rights Coalition will use deep canvassing to increase support for refugee resettlement and asylum amongst conflicted audiences. TIRRC will conduct more than 300 conversations with Tennessee residents in 2022. These will provide insights into the best messaging and educational materials to use, ahead of scaling in 2023 to more than 1000 conversations.

About the Team
As the Narrative & Engagement Manager with TIRRC, Emily Baird-Chrisohon leads a proactive campaign focused on shaping narratives and moving people towards more pro-immigrant sentiments and active engagement.  Emily oversees TIRRC’s deep canvassing work, faith leader network, Welcoming Tennessee Initiative, and more. Prior to joining TIRRC, Emily was the Regional Organizer with Religions for Peace USA and the Director of A Seat At The Table Knoxville. About the Project
Little Syria is an immersive musical theater experience that tells stories from the historical Little Syria neighborhood of Manhattan. In the next iteration, Offendum will create an enhanced film version of the live production to distribute to audiences on the web.

About the Team
Omar Offendum is a Syrian-American rapper and poet living in New York. Known for his unique blend of Hip-Hop and Arabic poetry, he has been featured on prominent world news outlets, lectured at dozens of universities, collaborated with major museums and helped raise millions of dollars for humanitarian relief efforts around the globe. Offendum is a Kennedy Center Citizen Artist Fellow; a member of the PILLARS Fund 'Muslim Narrative Change' cohort; and the creator of the poetry and musical production Little Syria.

Ronnie Malley is a multi-instrumentalist musician, theatrical performer, producer, and educator.  He is executive director of Intercultural Music Production in Chicago and a teaching artist with Chicago Public Schools. Ronnie's theatre credits include the Broadway musical tour of the Tony Award Winning The Band's Visit and Disney's The Jungle Book. He also performs with the music groups Allos Musica, Apollo’s Fire, Surabhi Ensemble, and more.

Ridwan Adhami is a multidisciplinary creative director, photographer, and film-maker. He has worked in numerous creative direction roles in the humanitarian space at Comic Relief US, Penny Appeal USA and Islamic Relief USA. Adhami also collaborated with the street artist Shepard Fairey and the Amplifier Foundation on the “We the People” campaign, which flooded the street on Inauguration Day 2017 with new symbols of hope. Ridwan’s first TED Talk, titled, "Creating Art with Purpose and Patience" chronicles the creation and impact of this collaboration and his career's work on the journey of identity through creative mediums.

About the Butterfly Lab

The Butterfly Lab for Immigrant Narrative Strategy at Race Forward launched in June 2020 to build power for pro-immigrant narratives that recognize and honor the humanity of immigrants and advance freedom and justice for all.

To learn more about our learnings from Year 1, read our report and toolkit.

Learn more about our Community of Practice, and sign-up for a future training.

Learn more about our Phase 1 work.