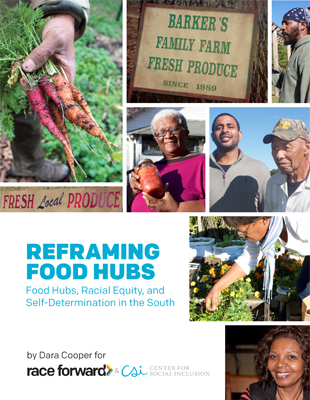 It is impossible to consider racial equity without understanding the dynamic and complicated history of a U.S. agricultural system birthed from the exploitation, domination, and destruction of entire populations.

Food systems work is about much more than food; it is deeply connected to the myriad of ways communities of color experience injustice. Racist policies and practices, both past and present, have made it impossible to achieve equity in our food system without addressing race specifically and directly.

In a food system and economy that exploits and fails people of color, food hubs and co-ops are one way that farmers of color are countering barriers to entry while transforming the food system to center racial equity, self-determination, and dignity.

Drawing from formal interviews with more than 25 farmers and leaders of food hubs and co-ops, visits with over 50 leaders in food systems work, and numerous conferences and conventions across the South, Reframing Food Hubs:

Based in Atlanta, GA, Dara Cooper is a national organizer with the National Black Food and Justice Alliance (NBFJA), an alliance of Black led organizations working towards national Black food sovereignty and land justice.

Race and the Economy