Building the We: Healing-Informed Governing for Racial Equity in Salinas 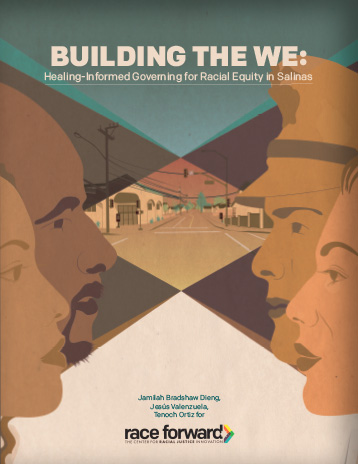 In 2014 an innovative partnership between government, nonprofit, and philanthropy began in the city of Salinas, California: Healing-Informed Governing for Racial Equity. In a context of mounting racial tension, leaders from these three distinct arenas collaborated to bring about a new initiative aimed at addressing the root causes of inequity and division within the city, on which Race Forward served as training partner and consultant.

Download "Building the We," published by Race Forward, which features key successes and lessons from that partnership and highlights two important aspects of the Salinas approach:

The report covers how leaders in Salinas laid the groundwork for this initiative, launched a training program for over one hundred government staff and community advocates, and formed a joint steering committee to operationalize racial equity throughout the city. Positive outcomes of this endeavor have already emerged including policy and program improvements in the Salinas Police, Public Works and Community and Economic Development departments.

In addition to describing the implementation strategy and outcomes for this work, “Building the We” highlights four key lessons that are useful for anyone planning to institute racial equity within their own locality: