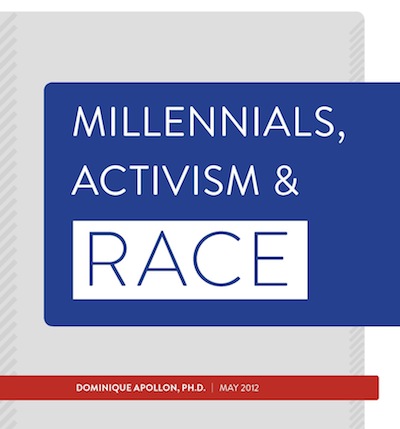 May 24, 2012 (New York, NY) -- Through a series of focus groups in key cities with Occupy participants and other activists aged 18-30, the Applied Research Center today released findings on young people’s motivations for engaging in activism, concerns about electoral politics, and thoughts on the extent to which race and racism should be an explicit part of current struggles for economic justice. The report also provides recommendations on key ways to engage millennials of all races/ethnicities in social justice work.

An accompanying article on young progressives was published by ARC President and Colorlines Publisher Rinku Sen, and an informational webinar will be presented to coincide with the release.

"From a researcher's perspective, it was a dream to hear from some of the most engaged progressive young people in the country," said report author and ARC Research Director Dominique Apollon. "And to provide a forum for them to express themselves freely, in ways that we hope readers of all ages and races will appreciate."

In ARC’s report Millennials, Activism and Race, results show that the most significant influence for young progressives to engage in social justice work is their own personal and family experience, particularly for young people of color. In discussing what makes an ideal society, there were varied descriptions, but all agreed that it is one based on community and cooperation -- and that primary barriers include: (1) a dominant ideology based on individualism (especially economic), which too often causes people to be left to fend for themselves, without sufficient public resources and supports, and (2) a general lack of awareness of histories of oppression with political and economic analyses, that the general public doesn't have an analytic framework to critique our political and economic system. Additionally, Occupy protesters were more explicitly anti-capitalism, and more profoundly disillusioned by the electoral process than social justice advocates who had not participated in the Occupy movement.

In discussions about economic inequalities and strategies to close income and wealth gaps, participants were asked if focusing strictly on issues of class was enough, or if race, gender and other factors need to be explicitly considered. The vast majority of participants argued that our society’s “post-racial” narrative is a challenge for racial justice progressives both externally and internally within the progressive movement - that an explicit racial lens is key to the success of social movements and that strategies should connect economic injustice to other systems of oppression like racism, classism, sexism.

“With recent Census data showing the majority of new births to be those of people of color, it’s not surprising that far from being ‘post-racial,’ millennials see that we have to talk about race to achieve social justice,” said ARC President Rinku Sen.

Millennials, Activism and Raceis a 32-page report with several infographics, dozens of quotes from the focus groups’ multi-racial participants, and detailed reactions on key current issues such as “to vote or not to vote,” “local vs national elections,” and “racial representation in Occupy.” Report findings are based on nine focus groups held in five cities (Atlanta, Baltimore, New York, Oakland, Portland) between February and April 2012, with participants who either worked/volunteered for a progressive organization or participated in the Occupy movement. This newly released report follows an ARC 2011 report Don’t Call Them “Post-Racial”: Millennials’ Attitudes on Race, Racism, and Key Systems in Our Society - both can be found at arc.org/millennials.

The Applied Research Center’s key recommendations outlined in Millennials, Activism and Race on the political engagement of young people includes follow from its key findings: