On June 28, 2017 The Center for Social Inclusion (CSI) merged with Race Forward. The content on this page was published on the CSI website prior to the merger. 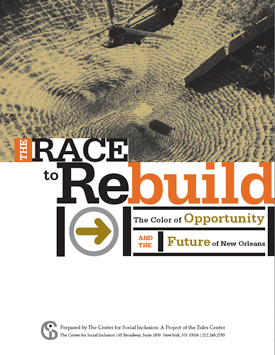 In order to solve a problem, we must know the problem. The problem in the Gulf Coast in August 2005 was not a hurricane. The levees broke and too many people were poor, sick and unable to flee. The “problem” is man-made, and this is good news. We can solve problems we create.

This report identifies the problem as our failure to invest in ourselves and each other through our government. It also identifies the role that race has played in driving the problem and detouring us from the solution. Race has been an architect of our institutions and systems. Race has built an unsound house that we all must live in, White and people of color. More often than not, people of color live in the basement, but even those in the master bedroom are confronted with the cracks in the walls. Understanding why Blacks were the faces of the abandoned and why they are having the most difficulty rebuilding their lives in the wake of the broken New Orleans levees, helps us see the problem and solve it. This problem is not just the Gulf Coast’s problem, it is our national problem. And solving it in the Gulf will help us bridge the gulf between people and opportunity. This is a hopeful report, despite the challenges we face. Our current national policies are deepening the abyss. Yet, this report shows that by making different policy choices, paying attention to race, we can recover New Orleans and the nation.